Felicity Bell was born in Grahamstown in 1962, moving to Jhb at the age of 11, where she attended Northcliff High School. Having completed her studies towards a BA in English and Latin, Felicity qualified for a teaching diploma through the University of Witwatersrand. A teaching position at Lowveld High brought Felicity to Nelspruit, followed by a position at Penryn College.

Felicity’s love of painting was greatly influenced by her father, who was an accomplished artist and portraitist in his own right. As a young girl, Felicity aspired to be an artist, a desire expressed as early as Grade 1. Although she followed a teaching career, Felicity always drew and painted, and having left the teaching world in the late nineties, she enrolled for classes with Karin Daymond, which entrenched her love of painting over the next six years. Whilst Felicity painted landscapes as well as still life, portraiture became her favourite genre, and in 2010 she executed her first commissioned painting.

In 2021, Felicity was declared the overall winner in the South African National Portrait Awards for her skilful and compassionate rendition of "Khulani: d. February 2021". The prize was awarded by The Rupert Art Foundation. Alongside her winning portrait, Felicity had two other paintings in the Top 40 Finalists titled; "A Visit to Dr Esther at Home" and "Dana, Gallery Owner" and one portrait which made the Top 250, "Peripheral Vision".

Felicity lives with her husband just outside Nelspruit, where she loves to paint in her light- filled studio, surrounded by her beloved pets. She has three children who have all inherited their mother’s artistic talent, and are successful artists in their own right.

"I am fascinated by people. By how we think, what motivates us, what we look like, and how our faces and general appearance so often reveal who we are. I have had no formal training in portraiture. Although I took valuable art tuition classes with Lowveld artist and teacher Karin Daymond, for 6 years, I am largely self-taught. I grew up watching my very talented father painting faces and figures and this formed the basis of the great urge I have to paint people...any people. Every single person has a story to tell, so every single person is worth painting. I love poring over the works of great portraitists and figurative painters....all the Impressionists, the Great Masters, the entrants to the great competitions....the BP Portrait Award, and our South African Sanlam Award, and most recently the hugely talented Cuban portraitist, Cesar Santos.

I believe it is the warmth of humanity emanating from a portrait that causes us to give it a second look that makes us ask...who is this? Why did someone want to paint this person?  What is his or her story?

Before photography, which has in no way erased the significance of portraiture, the only way to portray a person for posterity was to paint a portrait. Thus we have been blessed with a vast body of portraiture throughout the ages...and because of this the people we read about in history, as well as many who never made it into the history, are brought alive for us through the media of paint and pencil. Their personalities and looks speak to us through the centuries. Contemporary portraitists are doing the very same thing....now creating an image that is more than a photograph, that captures the essence of the sitter through the humanity of the artist herself which allows her to find the humanity of the sitter.

And that is what I strive to do...to speak to my viewers by depicting the warmth of humanity, with my brush." 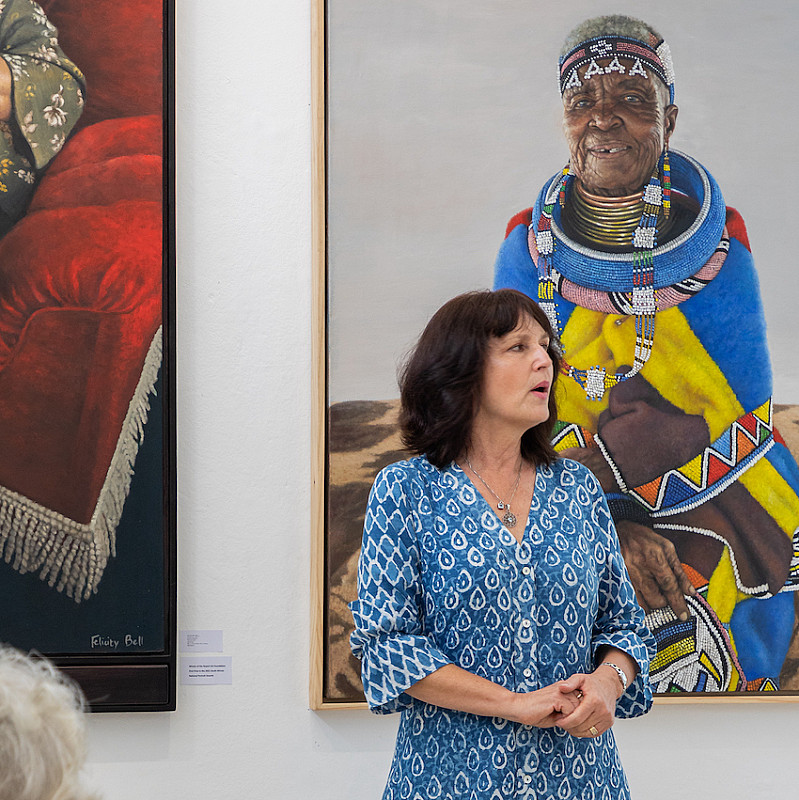 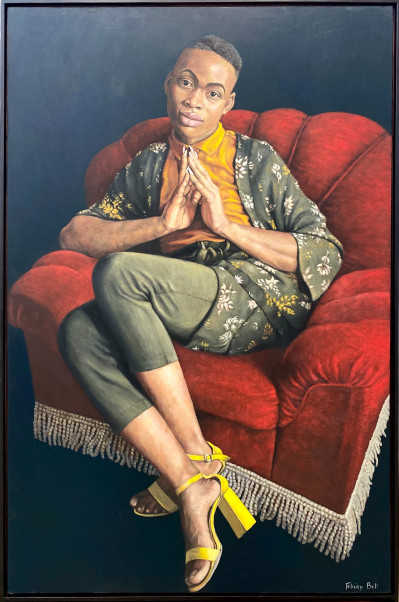 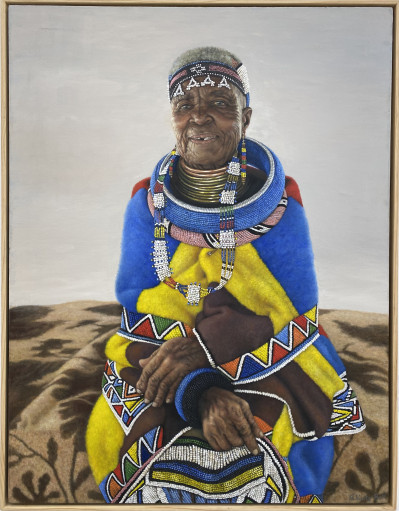 A visit to Dr Esther at home 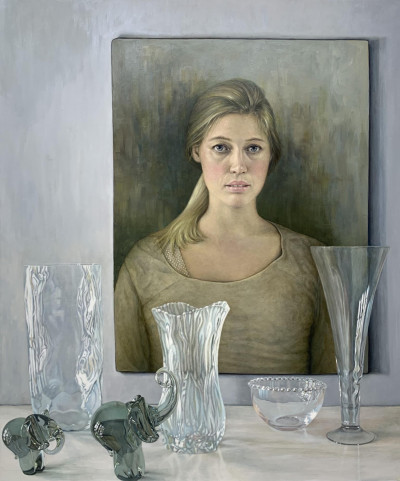 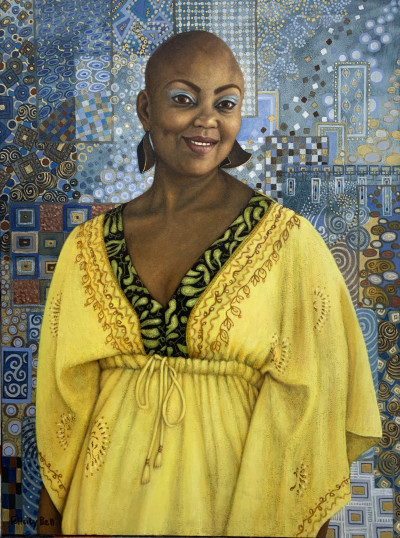 The charming Ms Nyambi in gold 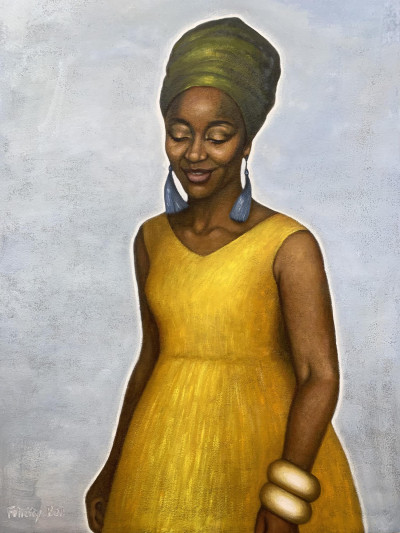 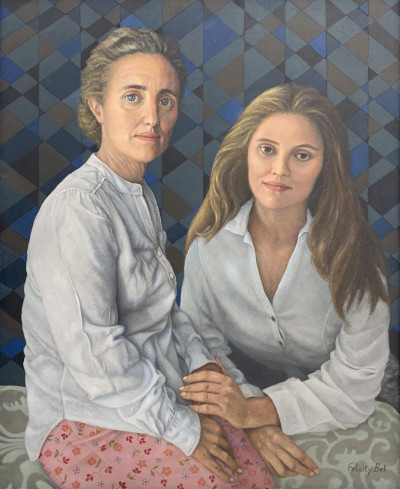 In 2012, Felicity held her first solo exhibition ‘The Best Side’ at the White River Gallery. Since 2010, Felicity has completed between 60 and 70 commissioned portraits and approximately 100 portraits for exhibitions and competition purposes. She has also participated in numerous group exhibitions in Jhb (Halifax Art) and in the Cape ( Rust-en- Vrede Gallery/AVA Gallery)

Felicity has entered the BP Portrait Awards, hosted by the National Portrait Gallery in London. This competition has been sponsored by petroleum giant BP for the last 31 years, is considered the biggest and most prestigious portrait competition in the world. In 2016, Felicity’s painting reached the second round of the BP Portrait Awards, out of approximately 2000 entries from 70 countries. Closer to home, Felicity entered the South African Sanlam Portrait Awards in 2015, achieving a position in the Top 40 in that year. Her work was shown at the Rust-en- Vrede gallery in the Cape, and subsequently formed part of a travelling show around the country. In 2019, Felicity recorded a remarkable three portraits in the Top100.

In 2021, Felicity was declared the overall winner in the South African National Portrait Awards for her skilful and compassionate rendition of "Khulani: d. February 2021". The prize was awarded by The Rupert Art Foundation. Alongside her winning portrait, Felicity had two other paintings in the Top 40 Finalists titled; "A Visit to Dr Esther at Home" and "Dana, Gallery Owner" and one portrait which made the Top 250, "Peripheral Vision".